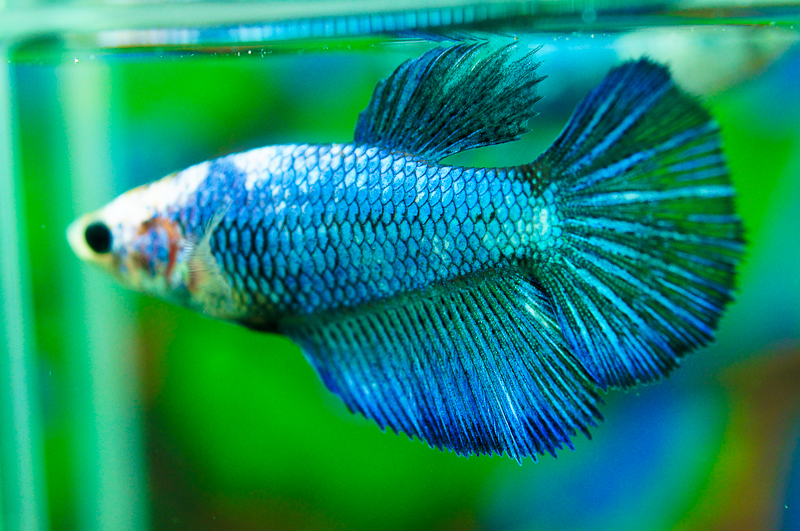 Male Betta fish are more popular as pets thanks to their attractive, colorful appearance. Due to that, the male Betta fish population is much more numerous and in many color variations.

Compared to males, female Betta fish are much smaller, inconspicuous in color, without attractive decorations, and their behavior is quite different from males. If you don’t know it’s a Betta fish, you can easily think that it is some other species.

Only during mating, if they accept the specific male – female Betta fish signal it by changing or increasing the intensity of the natural color.

Mostly, females are used for breeding, but they also can be used as a pet, especially in a mixed fish species aquarium. Lady betta fish are not so aggressive and they easily fit in different fish communities.

How to Distinguish Male and Female Betta Fish?

Females generally do not exceed a length of 2.25 inches and although they can be found in the same colors (red, neon, and purple, blue…) as males, the color takes on a stronger and brighter intensity or darkens during mating.

In addition to the intensity of color, female Betta fish can be identified by the so-called, ovoid spot, or fallopian tube that ends on the outside of the body. It looks like a pale-white pebble or a lump of salt. Through that tube eggs go out.

Female Betta fish are not aggressive and it is possible to keep them more in the fish tank. If you have a bigger aquarium, with plenty of space for plants and sand – you can keep up to 8 female Betta fish.

When two or more females live together it’s called cohort or sorority. Each of them will find their corner in the aquarium and, if necessary, separate and enjoy their personal space.

Although the behavior of female Betta fish has not been researched as male, according to specialized online forums – females are equally aggressive, but in a different way.

Within the sorority, a hierarchy and marking of the territory were organized. Each has its place in the aquarium where they retreat when resting or eating. In case someone attacks them, threatens the territory or hierarchical organization – aggression and fight will not be absent.

Owners of female Betta fish often state that females are prone to individualism, and some can be aggressive similar to males, while most are calm and like to isolate themselves in their territory in the aquarium.

Can Male and Female Betta Fish Live Together in the Aquarium?

It is not recommended to keep male and female beta fish together in the aquarium. You can try, so if you’re really lucky you might come across a really harmonious couple who can live together without constantly fighting. 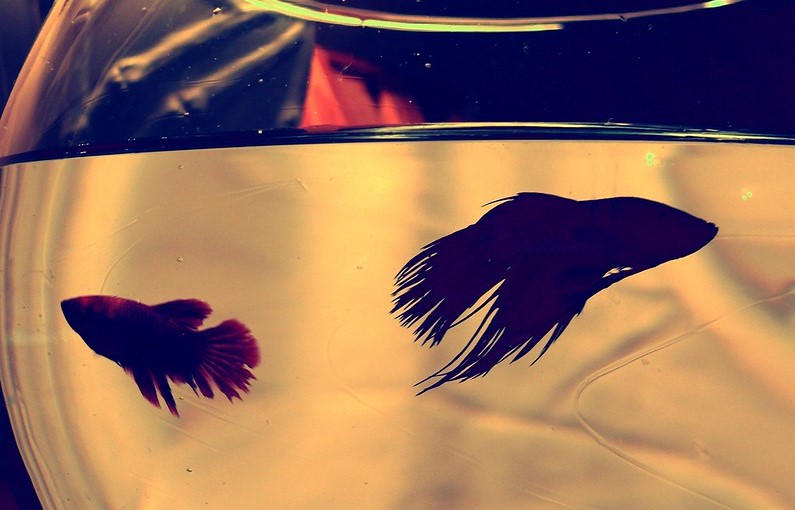 However, if you want your fish to live long and happily – do not keep them together, except for a short time during mating. Regardless of the fact that they are quite different in character, when they are together – male and female betta fish are generally very violent towards each other. This leads to death and injury, most often to females because they are smaller and weaker.

Compatibility With Other Fish Varieties

In general, Betta females get along well with members of other fish species and they are quite tolerable. That is one of the main reasons for the increasing popularity of female Betta fish. However, they not tolerate everyone.

Some Betta females are particularly aggressive to species that remind them of Betta males.

It is recommended that you put your lady betta fish in the company of species such as Neon Tetras, Rosy Barbs, White Cloud Mountain, Mollies or Swordtails. Before you create your mixed fish kingdom, ask pet store workers or experts what species can go together and how much aquarium they need.

Avoid species that are territorially oriented, as this could lead to conflict and even fighting. No matter which species you choose, keep an eye on the aquarium for a few days; if there are big conflicts and fights, it is best to put some fish in a separate aquarium. Otherwise, the bloodshed could occur.

In the love act of these unusual fish, it is the females that are more aggressive during the process, with no mother instinct.

The male is courting the chosen lady by spreading his fins and showing her all the splendor of his being. If the female accepts dancing and courtship – her body will darken and shine.

Also, the male is the one who builds the nest out of bubbles and does so regardless of the time of mating. The interested females can come and check the strength and quality of the nest. Spawning is done by the male embracing the female and during each hug the female releases 10-40 eggs.

With each laying of eggs, the male releases jelly. The male uses his mouth to retrieve the sinking eggs and returns them to the nest. If the female grabs them, she will probably eat them.

When the female finishes releasing – the male will at best expel her from his territory. If she doesn’t leave, he will kill her. That is why the females, after spawning, are transferred to another separate aquarium. The male is the one who continues to take care of the eggs for the next 24-36 hours when the baby Bette hatches.

Depending on the number of female beta fish you plan to keep in the aquarium – always provide a large enough aquarium and the necessary accessories first. If you are planning a mixed fish company, make sure that all species are compatible and that you can provide them with optimal living conditions in the aquarium.

This will reduce the risk of scratches and injuries when moving and feeding. Plants are very important for female betta fish because they are of tropical origin and due to their nature of resting on hidden places.

Females also use water surface for breeding and feeding.

If you are going to keep only one female betta fish – provide her with an aquarium of at least 10 gallons. There are 5 more gallons of water for each additional fish.

The Most Common Diseases

In principle, they are quite durable and resistant, but in a very small aquarium that is not properly maintained and cleaned, they can get sick. A common disease is feather rot. It is only important to notice it in time and treat it with medicines bought in a pet store.

Bettas can be injured very easily. Most are injured in fights, but also because of the rough surface in aquariums. That is why it is custom, soft sand and possibly stones of softer processing

Flatulence is a common problem in all pet fish. Mostly the reason is overfeeding and if it lasts longer it can lead to digestive and breathing problems.

Flatulence is also a sign of a viral or bacterial infection. If you notice this, first separate the fish in a special aquarium and if the condition persists, start treating it with appropriate medications.

Because they are less attractive than males, female Betta fish are mainly used for mating and breeding. Although their colors and appearance are quite modest, female betta fish – can be a great choice for an aquarium that has more fish species.

If you are a beginner in keeping betta fish as pets – females are smart choice. They are less aggressive, yet colorful enough to get to know them and fall in love with these unusual and beautiful fish.