Betta fish are cute and voracious tropical fish that we like to keep as pets. In order to be healthy, much like humans and other animals – they must eat a variety of foods; that is, food that provides them necessary nutrients and keeps them healthy.

Betta fish food market is full of all kinds of food, often of dubious quality. Due to their character Betta fish will not eat just any fish food, or if they eat it, they may have constipation or develop a more serious illness.

One of the simplest ways to enrich your Betta fish’s menu is to feed it with daphnia. Not always, and by no means just daphnia, but daphnia should be a regular ingredient in Betta’s diet.

Daphnia are so-called water fleas. More precisely, daphnia is a species of crustacean, small plankton that, like Betta fish, live in calmer tropical waters. They can grow up to 5 mm, which makes them an ideal food for smaller fish.

They are called water fleas because they move similarly to terrestrial ones. Some species of daphnia have even developed rough and sharp thorns that protect them from predators and make them not so tasty and light snacks. However, the ones you can buy in pet stores are free of prickly dangers.

Betta fish adore daphnia; they eat them in the wild, but also in the aquarium. For Betta to be healthy and without digestive problems Daphnia is “must have“ food. It can be bought as live, frozen or lyophilized daphnia.

It is nutritionally rich for Betta fish, but it can also act as a laxative. Therefore, often after constipation or Betta fish stomach problems, a diet richer in daphnia is recommended.

If you decide to use lyophilized daphnia, before you give it to Betta, soak it for10 minutes. This will prevent possible indigestion.

No matter what daphnia you choose, it is important to be careful and buy from a verified manufacturer and waterproof packaging.

The great danger of giving daphnia is tuberculosis, which can be transmitted through them. Tuberculosis is one of the most dangerous diseases that can infect Betta fish, but also other fish in the aquarium. It is very deadly and that is why if you are not sure about daphnia quality – it is best to grow daphnia by yourself.

We will explain the process further in the text.

Why Do Betta Fish Adore Daphnia?

Primarily, because feeding with daphnia is part of their biological process. Betta fish eat daphnia in nature, but also other fish creatures.

When Betta is in the aquarium, daphnia should be an integral part of the hatched Betta fish life. Purchased fish food is often enriched with rice or oatmeal, which swells in the stomach. If you overfeed your betta with foods like this will get constipated, and eventually grow more serious stomach problems. 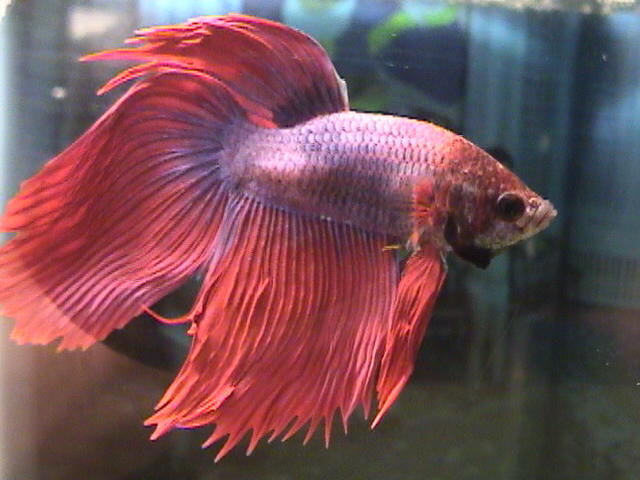 Don’t go to extremes and feed Betta only with daphnia or only with live and frozen food. Remember balance is most important. The daily amount of daphnia for betta fish should not exceed 1.8 grams. If you give them dried daphnia, know that they can also swell in the stomach of Betta fish, and to avoid that – soak them before giving them to Betta fish.

What Is A Nutritionally Rich Diet For Betta Fish?

When it comes to Betta fish that we keep in the aquarium – always keep in mind – that Bette do not behave like Betta fish in the wild. Even though it is the same type of fish – it is not the same environment.

In nature, Betta fish, according to biological instinct, behave as they must to survive. In the aquarium, many of these instincts are extinguished, that is, they are provoked just in extreme cases.

This does not mean that they do not exist, but simply, there is no need to use them. Thus, wild Betta fish will be able to survive for some time in more polluted waters or with minimal food, but dirty water and poor nutrition in the aquarium will probably cause various diseases.

That is why it is important to feed Bette in the aquarium with a variety of food, with an emphasis on the one that is rich in protein. Proteins are most important, followed by minerals and essential acids, and vitamins. Thus, the fish will maintain a healthy digestive rhythm, without delays and the development of digestive disorders and diseases.

When buying Betta fish food, inquire and read carefully the composition on the box. A mix of flakes, frozen and dried food, daphnia, and live food – distributed in properly measured meals will maintain the health of your Betta fish. If you want your fish to be happy and healthy, you will not buy your pet just any food.

Remember, newly hatched Betta fish cannot be fed to daphnia. After 3-4 weeks have passed and the young Betta have developed a digestive system, you can start giving them daphnia. Thus, from an early age, feeding will be healthy, which will certainly contribute to making them feel happy and satisfied.

How To Grow Daphnia Yourself?

As a portion of food for Betta fish, daphnia can be found in frozen form, frozen-dried, and as live daphnia. If you are a Betta fish breeder or keep two or more of them  as pets – it might be a better idea for you to breed them yourself.

If you decide to grow daphnia yourself, the easiest way is to have two containers. In one, you will constantly breed daphnia, and in the other, you will keep those that are ready to become food.

In principle, daphnia can be grown in an ordinary plastic container, which doesn’t release any toxic substances or can poison daphnia in any other way.

It is much easier, however, to grow them in a larger aquarium because it is easier to monitor the growth and spot the dirt in time.

To start breeding, buy daphnia from a well-grown breeder and inquire about everything related to the ethics of proper breeding. The ideal size of the breeding tank is 20 gallons, but if you do not have the conditions you can use the smaller ones.

A cellar, or a darker and cooler place, is best for growing daphnia. The water temperature should be between 65 and 70 degrees Faraday. A few days before you add the daphnia – pour water from a local pond or spring into the aquarium. Leave the water to stand for 5-7 days without a lid on the top; in this way, all harmful gases should evaporate from the water. Place them near a source of sunlight and insert a culture of euglena, Chlamydomonas, or chlorella. After 3-4 days the water should turn greenish and then you can add daphnia.

Growing daphnia by yourself will provide the right amount to feed a Betta fish at all times and you can also control the quality. This will save you money, but it could take a while until you learn all about properly growing daphnia and sometimes it takes a long time to establish a culture

The advantages are that you don’t have to worry about breeding; it is enough to visit your live daphnia supplier once a week or often, buy them and create meals for your Betta fish. However, it is difficult to find a quality breeder of live daphnia. You will likely transmit some bacteria or microorganisms that could kill your Betta, or pollute water and aquarium.

Neater, simpler, and can last longer. They are easier to store, so you can buy enough at once for two weeks or more. In case you need to give some unpleasant taste medicine to your Betta fish, it will be easiest for you to mask it with frozen daphnia. It is safe from bacteria and other dangerous microorganisms.

Some people, however, do not like to give frozen food to Betta or to store it in the freezer because it has an unpleasant smell. Also, sometimes you need to prepare it before giving it to a betta fish. Break into pieces or let it thaw a bit.

Advantages And Disadvantages Of Lyophilized Daphnia

The disadvantage is that this form of daphnia swells in Betta’s fish stomach, which can create constipation or other problems. The solution is to soak the lyophilized daphnia for 15 minutes before giving them to Betta fish.

You can’t go wrong with daphnia. You can only overdo it by giving too much daphnia to Betta fish; that is why it is important to adhere to the prescribed daily amount of 1.8 grams.

Solution is to divide them into two meals, or mix them with other foods. It is important not to overfed Betta fish with any type of food, not even with daphnia.

With various forms of daphnia it is possible to adjust to Betta fish taste and your time and money.  Decide what the best choice is for you. It is only important that the daphnia is of good quality and that it is not a carrier of bacteria and harmful microorganisms.