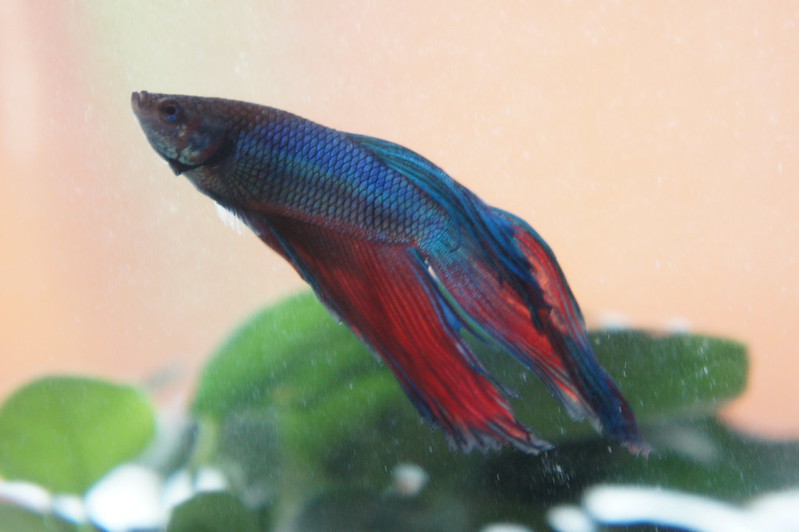 Can You Put A Betta Fish With Other Fish?

There are often conflicting and paradoxical opinions about Betta fish. Some are based on science and research, and some on the experience of owners and breeders. Everyone certainly agrees on one thing, and that is that the behavior of Betta fish is difficult to predict and what is true for one Betta fish may not be the rule for another.

Probably that’s why they have a reputation as “a hard to handle” species. Betta fish are complicated; no doubt about it, but it is the complexity that makes them attractive for Betta fish lovers.

Some say that Betta is not a fish species that loves company of other fish because it is territorially oriented and very aggressive towards anyone who swims on what it considers its territory. On the other hand, some think that Betta fish don’t like loneliness and need at least one tank mate.

Betta Fish And Other Species In The Same Tank – Is It Possible?

According to the experience of many owners – yes, it is possible, but it is also very hard. You have to try to see if it will work and to be honest, you will probably have to be constantly on the lookout. In addition to beauty, Betta fish are also known for their aggressiveness.

Male Bette especially does not tolerate other Betta males, while the female is “loved” only during mating. If you insist on having an aquarium where Betta fish will hang out with other fish – you need to develop a strategy.

You can’t just put them in an aquarium and let them manage on their own. If you do so – there will inevitably be fighting.

What Are You Not Allowed To Do?

Even when there is only one Betta in question and especially when there is a fish company – the aquarium must not be small. Bowls, vases, cups are out of the question. To successfully create a mixed-fish company – you need a 15-gallon aquarium for two fish. You will need 10 gallons for each new fish.

No matter what species they are, don’t introduce them abruptly. Betta fish can experience this very stressfully, and in addition to the fact that they will certainly react aggressively, it is also possible that they will get sick.

Do not put two Betta males in the same aquarium. That camaraderie will never succeed because they are both territorial and aggressive males. Give up on that idea right away.

Do not place Betta in the company of other aggressive fish species. This will, despite your efforts, sometimes create great confusion and bloodshed. Also, avoid fish of vivid colors and larger than Betta fish.

Do not add a fish that has long fins and that behaves similarly to Betta.

If you have already decided to gather the company of Betty, then add more than one fish of another species to the aquarium. The best is 3-5, because Betta will attack from time to time, and if there are more – they will not always harass the same fish.

Before you add any fish to the aquarium with Betta – ask yourself which species are best. By no means add aggressive, predatory fish or those with striking and colorful fins. In short, the best are those species that are in character the total opposite of the Betta fish. Mild, calm, and non-aggressive.

No matter what and how much company they have decided – an additional, spare, and large enough aquarium must always be ready and on standby if something goes wrong.

What Fish Species Are The Best Tank Mates For Betta Fish?

Although both Betta females and males are prone to aggression and selfishness compared to what they consider their territory – males are still much more dangerous to other Betta males and other fish species. On the other hand, Betta females are not as attractive as males and are not the first choice for a pet.

Although they are more peaceful in nature and it is easier for them to find suitable tankmates – most opt ​​for males. In addition to beauty, some owners like its aggressiveness, because then the body color becomes more pronounced and brighter. Females are usually smaller, lower color intensity, and although they are not as passionate as males – it is easier for them to find pleasant company.

So, it is best to add 5 fish of another species to one male Betta fish.

The best fish species for friendships with Betta fish males are:

You can also try species as Green Neon Tetra and Albino Cory. They should behave mild with zero chances to provoke Betta in any way.

Some Betta fish experts recommend Zebra Loach or Black Line Rasbora. By no means they could harm Betta males ego or territory, so you can try with these species too.

Candy Striped Pleco is a great choice because they usually stay at the bottom of the aquarium, which suits male Betta male perfectly.

Betta sororities are a hierarchical organization of at approximately 3/5 Betta fish females. Since Betta females are also territorially oriented, but not as violent as males.

When there are more of them in one aquarium – they organize themselves into a sorority or Betta harem, as they are still often called.

In this way, each female has her own part of the territory, but according to a certain hierarchy. The most dominant one takes the largest share. In sororities Betta females can live together and although a fight can occur, it happens much less often than if they are males.

To create a Betta harem of 5 females, you need an aquarium of at 30 gallons or more. Also, it must have enough plants and ornaments – so that each Betta has its own territory, and hiding place.

Since they are much calmer, the Betta harem can withstand the company of other fish, but not any. Here are few fish species you can put in a tank with Beta sorority

These fish shouldn’t worry Betta females and if the water and food is good, tank atmosphere will be quite satisfying.

Count at least 5 gallons of water for each additional fish. So, before you even decide on a mix-fish aquarium, be sure that you can afford it both financially and in time.

Introducing Betta Fish To Other Species

This can be tricky and requires a lot of patience as well as additional equipment. Perhaps the simplest way to create a mix-fish aquarium is to get to know them while they are only a few weeks old. Even though you can’t be sure that you will avoid conflicts even then, they are more likely to get used to each other faster.

When Betta is alone in the aquarium and you want to gather company, it is best to keep the potential fish friend  in a smaller aquarium first, which you will put next to the main one. It’s important that Betta can see them, but that she can’t attack them.

Observe how Betta behaves and if you estimate that you are used to it, after a day or two, put new roommates in the aquarium where Betta is. If an attack occurs immediately, remove the fish from the aquarium and try a divider.

The fish will be in the same aquarium, but will not be able to touch each other. Sometimes it doesn’t even help, so you have to take a darkened divider. If you really insist that you have such a condition – a splitter is your only option. Bette is easy to provoke, so even one look at another fish is enough to cause an attack or stress. When prevented from directing an attack on an opponent, Betta may be offended by aggressive swimming or hitting the walls of an aquarium or divider.

These are the simplest options for any version of the fish-mix aquarium. You can also buy more refined aquariums, such as community tanks, but there is no guarantee that Betta and other fish will really get used to each other and live in peace.

Also, if you are not sure about the origin and health of the fish you plan to add to the aquarium, keep it for a few days in a hospital tank, where you will pour water from the main aquarium. If you estimate that everything is fine, add the fish after 7-10 days. It is best to always use a splitter to get started. If you fail and Betta is constantly attacking – don’t push. Stress is very dangerous for Betta fish, and almost the slightest change for them is a shock.

Some types of snails that Betta females and males can get along with are:

Mystery Snail: Properly sized and inconspicuous in color, this snail will also serve as a kind of live aquarium cleaner, as it will eat all the food that Betta doesn’t eat.

Malaysian Trumpet Snail: Also, it will eat all the leftover food from Betta fish. These snails are nocturnal species, so they will be active while Betta sleeps. This snail is hidden in the sand during the day.

In addition to snails, you can add certain types of shrimp. They will make sure that too much algae does not multiply in the aquarium. There are many types and sizes, so choose the ones that will not became Betta fish food. The best are the Amano shrimps, but you can it a try with Ghost shrimp or Cherry shrimp.

Yes, you can put Betta fish in a tank with other fish. However, how and how long this society will last – there is no guarantee. If Betta fish were large and terrestrial animals – they would certainly be very dangerous. They are wild and aggressive and it’s hard to tell sometimes why they behave the way they behave.

It is certain that tanks with Betta and other species will take a lot of time and money. It is very important that the fish are compatible in terms of water and food conditions. If this sounds too complicated for you or you have no experience with Betta fish, it may be best to try Betta sorority first.