How Can I Tell If My Betta Fish Is Stressed?

Stress is not just a faithful companion of people and their daily big and small conflicts, victories, and defeats. Shock and some types of panic attacks are also characteristic of animals and fish. Many people think they cannot experience stress like humans because in general, we all consider them primitive beings.

However, as primitive as they were, both animals and fish are living beings that react to the stimulants from the environment through their senses. You’ve probably heard many times how stress kills people, causes illness and mental disorders, and believe it or not, it’s similar to Betta fish.

Stress is anxiety, the feeling that we are threatened or that something bad will happen to us. Even good and beautiful news can be stressful and harmful. It is similar to Betta fish. Many situations, even seemingly insignificant ones, can be the trigger for a Betta fish to feel threatened and enter a state of stress that can last for several days.

When a Betta fish is stressed, it means that the level of adrenaline and cortisol in their body increases. The longer Betta is in a state of stress – the higher the chances that he or she will get seriously ill. 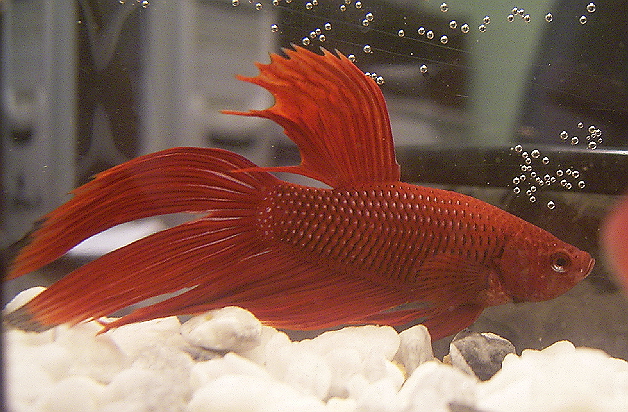 To know what’s going on with your fish pet, the easiest way is to observe patterns of behavior and take a close look at their body from time to time. In this way, you will most easily and in time notice all the changes that deviate from the usual behavior

Read below the most common indicators of a stressed Betta fish.

Betta fish love and need to rest. Sometimes they do it hidden behind plants or castles in the aquarium, and sometimes floating. They do not do it permanently but occasionally, and if such behavior lasts for two or more days, it is probably something else.

If Betta is constantly floating on the water surface and gasping, it is possible that the water is polluted or not at the appropriate temperature.

If Betta swims dramatically and aggressively through the aquarium, colliding with plants, scratching its fins, and injuring itself – that is a serious sign of great anxiety. Although this can only be a short-lived whim of the Betta fish, if the behavior lasts longer than half an hour, move the fish to a quarantine aquarium and check the water conditions.

Betta fish are known for their magnificent, intensive color. When they are sick or stressed – the color usually fades.

It’s a biological process, intending to conserve energy and stronger immune defense, but it’s also a way of camouflaging for Bettas living in the wild.

When they reduce the intensity of the color – they are less noticeable to predators. In an aquarium, reduced color intensity is often a sign of illness or stress.

If all is well with the water and Betta eats normally, maybe it’s just a passing Betta fish mood. If it continues for several days and other unusual symptoms appear, it is best to consult a veterinarian.

Similar to humans, highly stressed Betta fish will ignore food. Since Betta fish are cheeky and big gourmands – refusing food can be a sign of various problems.

Betta may have digestive problems, most often constipation.

You will solve this by not feeding it for one day, and then you will enrich your diet with live food. Also, if you have abruptly changed your diet, it is quite possible that Betta doesn’t even recognize food or knows, but doesn’t like it.

It is much better to introduce new food gradually and that Betta’s diet is always varied. Feed it in the allowed portions, never more than recommended because it could cause constipation and other metabolic problems.

If Betta is a new resident of your aquarium, ignoring food is a sign of stress and the usual process of getting used to the new environment. It is the same when you add new fish varieties to the aquarium where Betta ruled.

This is a big shock for them because they are territorial fish and it takes some time before they get used to the new situation.

It is up to you to provide them with healthy and quality water and enough darkness so that they can rest. Remove any food they do not eat from the aquarium after ten minutes.

It is important that the aquarium is large enough and that there are enough plants, gravel, castles, and other accessories that will keep the fish interactive.

Believe it or not, Betta fish can be boring, because if they are healthy – they love to explore. They are curious and it could be said – they love life.

If their life in the aquarium is poor – they will often be under stress because just by swimming, hiding behind plants, or in encounters with another species – Bette neutralizes stress and the natural tendency to aggression.

That is why you must have either more fish in the aquarium with a Betta fish or enough accessories to animate Betta, to inspire moving and swimming. You can even put a mirror or draw something on the outside of the aquarium. That will be enough to entertain Betta fish.

The Crowd in the Aquarium

Remember that for one Betta fish, the minimum aquarium size is 5 gallons. While many experts swear that Betta lives quite well in a twice as small, it is more of life support – than a fulfilled and happy fish life.

If you keep more fish in a small aquarium and especially if there are different fish species – then it is real torture for everyone. In such an environment – stress is a completely normal reaction. As we have already mentioned, Betta fish like to have fun and explore.

Also, it is easier to pollute the water in the crowd, and Betta is very sensitive to the water’s purity and temperature. To avoid these situations – carefully plan the composition and size of the aquarium. If you are not sure what is correct, consult experts.

How Bad Is Stress For Betta fish?

Prolonged stress on any living being leaves great consequences on health. Betta experiences most of the stress from the environment and poor conditions in the aquarium. Some have unfortunately been raised this way since they hatched and often these traumas shorten their lives.

Bettas are overly sensitive fish species and everything causes them a shock. In order for them to live to the maximum, (3-5 years) you have to provide them quality conditions.

Stress can kill them just like a dangerous infection or it can be a trigger for a serious and incurable disease.

Stress is also a way of communication for Betta fish. Of course, you don’t have to worry all the time, so you get stressed and panic.

It is very simple and natural.

Take care of your Betta fish and everything will be fine.