Betta fish are interesting tropical creatures that tend to behave strangely at times; often without a clear cause, but quite enough to worry the owners. One such phenomenon is when a Betta fish spits out food.

Such behavior seems rude, impudent, and to some extent charming, because Betta fish look like dangerous scoundrels.

However, is there a serious health reason why Betta fish spit food from time to time?

Betta fish really can spit out food from serious health problems, but to make you happy right at the beginning – that’s mostly not the reason. Still, spitting food is reason enough to wonder what kind of food you give your sassy fish pet; whether it is sufficiently varied, tasty, and whether it satisfies Betta’s nutritional needs. Also, you may want to ask yourself how often you feed your Betta and whether you take enough care to ensure a quality life for your pet.

Spitting is mostly a sign of some kind of Betta fish rebellion. Something is certainly bothering him, and what is the most common cause of such behavior, read below.

The maximum daily amount of food for Betta fish is 1.8 grams. So, not for one meal, but the whole day. Betta fish, like all fish species we keep as pets, are very tiny creatures. In such a small organism, the stomach and the entire digestive system fit.

Although Bette loves to eat and eat whatever you serve them until they get sick once or develop a more serious problem like constipation or bloating. That is why the daily portions of food mustn’t exceed the recommended amount.

You can treat them from time to time, but it would be great to reduce the amount the next day. Some Betta fish owners do not feed Betta fish at all one day a week. This helps maintain a healthy digestive rhythm and if there is any food left that could harm the betta fish – one day of fasting is enough to get rid of the excess.

So,  keep in mind that Betta fish stomach is the size of an eyeball. When feeding it frozen or dried food, first carefully break off the piece and let it thaw at room temperature. If you feed it pellets or flakes, it is not a bad idea to let it swell first, and then give it to Betta. This will give you control over the size and amount of food. The portions must be so tiny that Betta can easily digest and swallow them. Remember to remove any excess food from the aquarium 10 minutes after feeding. Betta will certainly not eat it, and if it stays it could cause water pollution.

Since Betta fish are resourceful – it is possible that by spitting food, they are trying to chop it. Betta fish are mostly greedy and will do everything in their power to get a good bite.

As we said, Betta fish are really unusual and even intelligent. Sometimes Betta simply refuses to eat the food it normally consumes. Betta does it out of pure whim or boredom, not for health reasons. Maybe he got bored or the food changed taste over time.

However, it happens that if you change the food, add something new or buy from another supplier – Betta simply doesn’t understand that it is food. It’s not that taste that Betta associates the notion of food with and that may be why he spits it out.

You can try to avoid such situations by mixing old and new foods or by gradually introducing new foods. Sometimes, though, you’ll have to look for a new supplier whose taste Betta will love.

Digestive problems, constipation, and bloating are common ailments of Betta fish. Sometimes the cause is poor food quality and sometimes improper or monotonous diets. Since Betta fish are big gourmands, refusing, ignoring, and even spitting food – can be a sign of digestive problems.

Most often it is constipation or bloating. Bettas have a very small digestive system and are very sensitive. If the diet is based mostly on pellets and flakes – they can very easily cause constipation.

What Betta’s stomach failed to digest – it swelled up and literally clogged its digestion. To solve this – the simplest is to fast one or more days if necessary. After that, feed Betta with food from a verified supplier.

Daphnia and other larvae help to naturally get rid of all leftover food. It is always good to feed Betta fish a variety of foods that will be nutritionally rich and that will not create digestive problems.

Sometimes spitting and refusing food is a sign of more serious diseases, such as dropsy or other infections. In addition to spitting food, you will notice other symptoms such as various changes in the skin, the appearance of purulent lesions, discoloration, and lethargy.

No matter how your Betta behaves, it is always important to monitor your fish friends behavior and eating habits. This is often the only way to spot a problem in time and react properly.

Sometimes, due to water pollution or through live food – it is possible that a parasite has reached Betta’s stomach. If you suspect that this could be the cause of spitting, vomiting, or refusing food – put Betta to a hospital container. Infections with parasites can be dangerous and spread quickly, so if you have an aquarium with more fish – immediately transfer Betta and consult a veterinarian about the proper treatment.

In some cases, Betta is neither less intelligent nor too picky –  but lacking life experience. Let’s be honest, when we buy Betta fish we generally don’t know how old it is  and don’t know we’re feeding until then.

Let’s be honest, when we buy Betta fish, we generally don’t know how old fish is and what was on its menu.

According to online advice, Betta fish should be fed live larvae as soon as they hatch from eggs – but this rarely happens in practice.

If Betta is raised in specialized ponds – they are probably fed synthetic or the cheapest food that only maintains them. Unfortunately, this is a very common case – which later results in many dangerous diseases and high susceptibility. 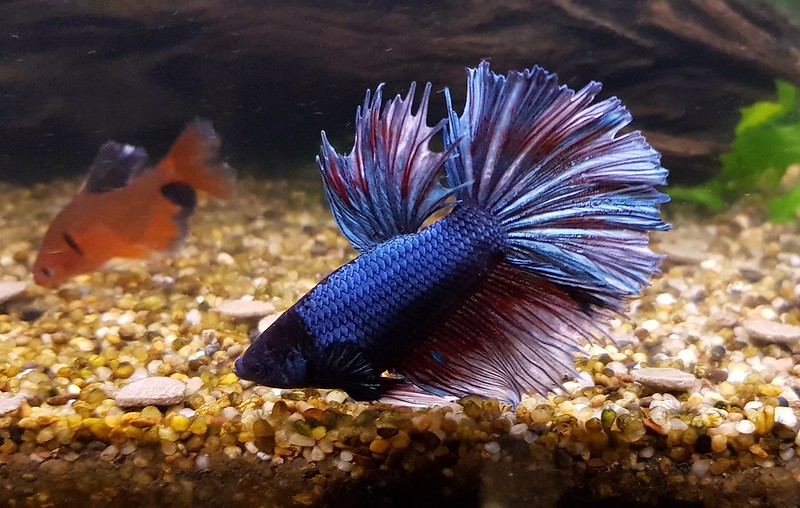 If Betta has not been fed adequate food since the beginning of his life, chances are high that he has not developed a strong enough immune system. If you bought such a fish and then started feeding it quality and varied food – Betta probably don’t register it as food, so they spit it out.

It is possible, though Betta just doesn’t like the taste. Sometimes Betta is too young and has a digestive system that cannot develop so it can digest food quickly and easily. If you know Betta is young, base their diet on live foods; daphnia, insect larvae, etc.

It is closest to the food that they would eat in the wild. Healthy Betta usually grows to 7 cm / 3 inches. If you notice that your Betta is growing and is cheerful and happy, gradually introduce it to new foods like pellets, cereals or frozen foods.

How Do I Know Which Food Is Best For My Betta Fish?

If you don’t know if your Betta fish came from quality breeding, it’s best to start by giving it safe food. This means better quality pellets or flakes, carefully dosed. You will surely find more types of food for Betta fish in better-stocked pet stores. It is important to look at the ingredients and take the ones with the best ratio of protein, vitamins, and minerals.

Remember, Betta fish are carnivores and their diet must be protein based. Gradually introduce more varied foods and if Betta persistently spits out one species, do not force it to eat; find another supplier or try again after a while.

Be especially careful with live foods. Daphnia and various types of insect larvae are great for the immunity of Betta fish, but they can be a carrier of bacteria and parasites. It is best to cultivate live food yourself or buy from a safe supplier.

Should I Worry If Betta Spits Food Out?

Sure, such behavior will intrigue you, but if Betta spits only one type of food and eats the rest normally and behaves normally – you have no reason to worry. Sometimes it’s some kind of Betta’s game, or fish just trying to adjust a large piece of food to its mouth size and stomach.

Maybe it doesn’t like the taste or just doesn’t perceive food as food. However, if spitting and generally refusing food is something that lasts longer than five days – the cause is something else. Then take a closer look at Betta and follow behavior.